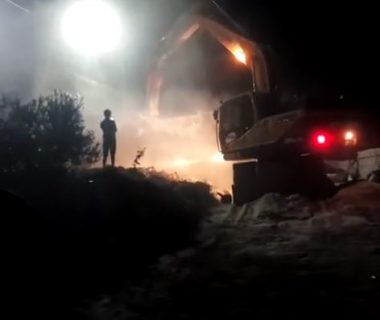 Israeli soldiers demolished, on Monday at dawn, four homes, and injured sixteen Palestinians, in the al-Walaja village, west of Bethlehem, in the occupied West Bank.

Dozens of soldiers surrounded and isolated the village, before invading it, and prevented the Palestinians from entering or leaving it.

The Israeli army said the buildings were constructed without permits from the “Civil Administration Office,” which runs the administrative branch of Israel’s illegal occupation of the West Bank.

The soldiers later demolished the 100 square/meter home of Ahmad Abu at-Teen, and the home of Ala’ Hussein Hajajla, in Khallet as-Samak area.

Dozens of Palestinians protested the invasion, and barricaded themselves in the homes, before the soldiers assaulted them and forced them away.

The army carried the demolitions out after an Israeli court rendered, on Sunday evening, its final decision in support of the destruction of the properties.

It is worth mentioning that the soldiers also demolished an agricultural shed in the village, and removed a mobile home, owned by members of Shqeirat family.

The soldiers assaulted the Palestinians and fired rubber-coasted steel bullets and gas bombs at them.

The Palestinian Red Crescent Society (PRCS) said the soldiers injured sixteen Palestinians, including six who were shot with rubber-coated steel bullets, in addition to assaulting and wounding ten others.

The wounded Palestinians were rushed to hospitals in Bethlehem, while the medics provided many others with the needed treatment for the effects of teargas inhalation.

In addition, the soldiers demolished a shed and a room in Yatta town, south of Hebron, in the southern part of the occupied West Bank.

In related news, the soldiers abducted nine Palestinians, and injured many others, during military invasions into communities and homes in several parts of the occupied West Bank, including occupied Jerusalem.