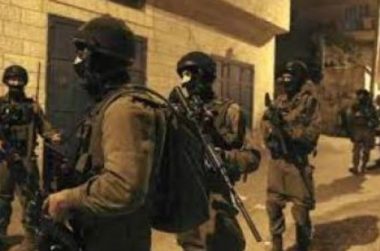 The Palestinian Prisoners Society (PPS) has reported that Israeli soldiers abducted on Monday at dawn, eleven Palestinians, most of them former political prisoners, in several parts of the occupied West Bank.

In addition, the soldiers abducted Khaled Abu Zeina, 58, from Jenin, Ahmad Marwan Shehab, 22, from Tulkarem, and Moath Mohsin Shreim, 22, from Qalqilia, in the northern parts of the West Bank.

The soldiers also caused many Palestinians to suffer the effects of teargas inhalation during protests that took place in Nur Shams refugee camp, in Tulkarem, and in Jenin refugee camp, following the Israeli military invasions.

In Hebron, in the southern part of the West Bank, the soldiers abducted Amin Shafiq Qawasma and Abdul-Karim Abu Turk.

It is worth mentioning that the soldiers abducted, on Sunday afternoon, a Palestinian woman from Ramallah, in central West Bank, after stopping her at the Qalandia Terminal, north of Jerusalem. Israeli soldiers abducted, on Monday at dawn, at least nine Palestinians, and injured many others, during military invasions into communities and homes in several parts of the occupied West Bank, including occupied Jerusalem.

They added that the soldiers also fired many gas bombs and concussion grenades at local youngsters, who protested the invasion, causing several Palestinians to suffer the effects of teargas inhalation.

The soldiers also caused several Palestinians to suffer the effects teargas inhalation in Qabatia town, south of Jenin, after the army invaded the town, and searched homes, including one belonging to Fateh movement secretary, Mahmoud Zakarna.

Zakarna stated that the soldiers conducted violent searches of his home, and interrogated him and his family.

In addition, the soldiers invaded the home of Mohammad Tawfiq Zakarna, and searched the property, in an attempt to abduct his son Amin, but he was not in the property.

In Tulkarem, in northern West Bank, the soldiers abducted Ahmad Marwan Shehab, from his home in Nur Shams refugee camp, east of the city, after the army searched the property, causing damage.

The soldiers also caused many Palestinians to suffer the effects of teargas inhalation during protest that took place in the refugee camp following the invasion.

In related news, the soldiers abducted Moath Mohsin Jaradat from his home in the northern West Bank city of Qalqilia, and attacked many protesters with gas bombs, concussion grenades and rubber-coated steel bullets.

In Hebron, in the southern part of the occupied West Bank, the soldiers invaded and searched homes and abducted Amin Shafiq Qawasmi, 31.

The abducted Palestinians have been identified as Odai Gheith, Mohammad Gheith, Ali Abu Diab, Majdi Obeisan and Ala’ Abu Tayeh.