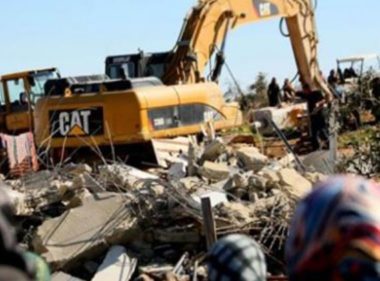 Israeli soldiers invaded, on Tuesday morning, the al-Jiftlik Palestinian village, in the Central Plains of the occupied West Bank, demolished one home and abducted its owner.

Media sources said dozens of soldiers, accompanied by bulldozers, invaded the village, and demolished the home of Omar Abdul-Karim Rahaila.

They added that the soldiers opened fire at the Palestinian while driving back home from work, after he was informed that the army was demolishing his property.

The Palestinian was not shot, yet, suffered various cuts and bruises, before the soldiers abducted him, and took him to an unknown destination.

Palestinian medics tried to provide the needed treatment attention to the wounded man, but the soldiers preventing them from even approaching him.

The army claims that the home was built without a permit from the Israeli Civil Administration, the administrative branch if the illegal military occupation.