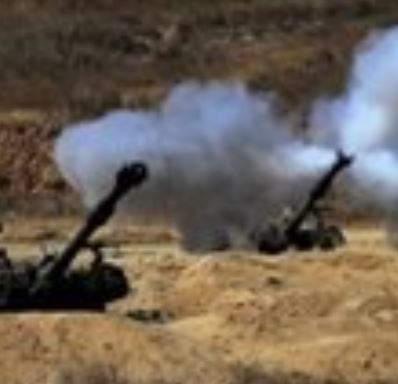 The Israeli army and Air Force fired many shells and missiles into border areas, in the Gaza Strip, in addition to firing dozens of rounds of live ammunition, while Israeli drones flew over the coastal region.

At least one tank shell was fired into an area, east of the al-Maghazi refugee camp, in central Gaza, and was followed by many live rounds.

Shortly afterwards, the army fired a tank shell into a Palestinian land, in Juhr ed-Deek area, southeast of Gaza city.

The army also fired several missiles and shells into Palestinian lands, in borer areas of the Gaza Strip.

Israeli sources claimed the army fired the missiles and shells “in response to a shell” that was reportedly fired from Gaza, causing no damage or injuries.

They added that two other shells were also fired from Gaza, but landed inside the Gaza Strip.

On its part, the Israeli military held Hamas responsible for any escalation in the Gaza Strip, and nearby Israeli areas.

It is worth mentioning that the Ministry of Health in the Gaza Strip said that Israeli soldiers shot and injured nine Palestinians, protesting near the border fence in the coastal region.