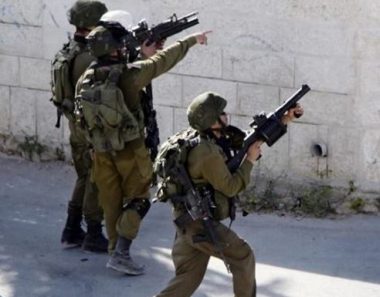 Israeli soldiers invaded, Thursday, ‘Azzoun town, east of the northern West Bank city of Qalqilia, and injured dozens of Palestinians, who were protesting the American decision to recognize Jerusalem as the unified capital of Israel.

The head of the Emergency Department in Qalqilia, Monther Nazzal, said the medics provided treatment to four Palestinians who were shot with rubber-coated steel bullets, and moved another to Darwish Nazzal governmental hospital.

He added that the medics also provided the needed treatment to dozens of Palestinians, who suffered the effects of teargas inhalation.

It is worth mentioning that the soldiers also invaded Qalqilia city, and Kufur Qaddoum town, and injured at least seven Palestinians.