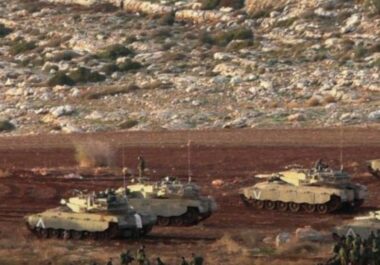 Dozens of Israeli military vehicles started the deployment near the tents of Bedouin Palestinians in the Northern Plains of the West Bank, ahead of live-fire military drills.

Human Rights activist Aref Daraghma stated that the soldiers deployed their vehicles in front of the tents of the Palestinian shepherds in the al-Farisiyya area.

He added that the army intends to conduct military drills using live ammunition and shells in the area and that the Palestinians were ordered to leave during the training.

It is worth mentioning that a month ago, the Israeli army conducted one of the largest military drills in years, with the participation of hundreds of vehicles, leading to excessive damage to the Palestinian meadows.

The army conducts military drills in several parts of the occupied West Bank, including the Northern Plains near Hebron and Jenin, among other areas.

These training drills, conducted by the Israeli occupation army, have led to massive destruction of lands and other property, burning hundreds of dunams of farmlands, displacing hundreds of Bedouin families, and causing dozens of casualties, including fatalities.