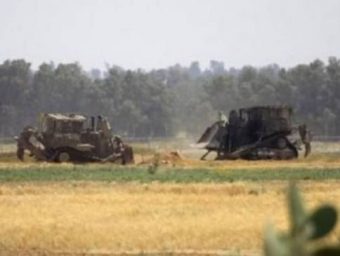 A number of Israeli army vehicles, and bulldozers, carried out, on Monday at dawn, a limited invasion into Palestinian agricultural lands east of Rafah, in the southern part of the Gaza Strip, and started uprooting them while firing live rounds and smoke grenades.

The WAFA news agency said the invasion was carried out by four tanks and three armored bulldozers, and that the soldiers advanced approximately 150 meters into Palestinian agricultural lands.

The soldiers also fired many live rounds at random, and placed sand hills in the invaded lands, close to the border fence.

The invasion is part of frequent attacks carried out by the soldiers into Palestinian agricultural lands near the border areas in the northern and eastern parts of the Gaza Strip, preventing the Palestinians from entering and planting their own lands.