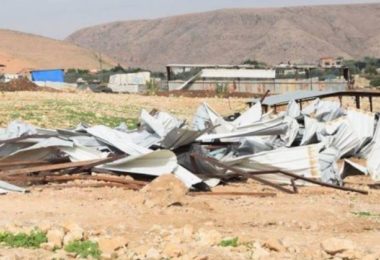 Activist Aref Daraghmeh, said that the Israeli authorities ordered two Palestinian brothers, Rami and Hafez Masaeed, to remove their structures within 96 hours, under the pretext that they were built without an Israeli issued permit.

WAFA added that Israeli forces confiscated, on Monday evening, a Palestinian-owned water tanker, east of Tubas, west of the Jordan Valley, according to Daraghmeh.

He stated that Israeli forces seized the water tanker while the contractor was working on rehabilitating a road east of Tubas.

It is important to mention that Israeli authorities also delivered orders to halt the construction of a poultry farm and retaining walls near Bethlehem.

According to the UN Office for the Coordination of Humanitarian Affairs (OCHA), Military Order 1797 allows for the expedited removal of unlicensed structures deemed as “new”, within 96 hours of the issuance of the ‘removal order’. The use of this order has resulted in the demolition of at least 66 structures since coming into effect, in July 2019.