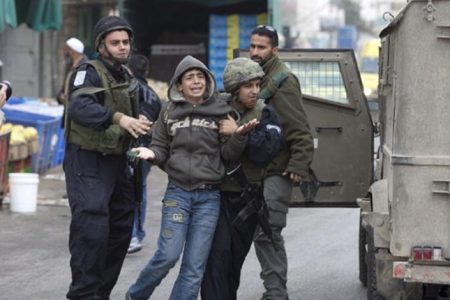 Hannoun, who has served eight years in Israeli prisons for his activism, made headlines earlier this month after Israeli soldiers assaulted him as he participated in an anti-settlement protest in Shufa village, south of Tulkarem.

It added that the Israeli troops detained one Palestinian after ransacking his home in Hebron district in the southern West Bank.

A similar raid was conducted southwest of Hebron, in Deir Samet village, which also resulted in the detention of one Palestinian.

Israeli soldiers stationed at a military roadblock, west of the Ibrahimi Mosque in Hebron, stopped and detained a Palestinian minor.

In occupied East Jerusalem, Israeli police detained one Palestinian during an incursion into al-‘Isawiya neighborhood.

The Palestinian Information Center reported that soldiers detained Adham Ziyad Abu Aisha, from Hebron, and Islam Sabri Masalmeh, from Deir Samet town, after searching and ransacking their homes, taking them to an undeclared location.

Local sources said that dozens of Israeli soldiers stormed Anabta town, east of Tulkarem, triggering confrontations with local Palestinians, which resulted a young man being shot in the foot by a soldier.

The young man was transferred to the hospital where he is in stable condition.

Important to note that Israeli forces detained 2 children near Nablus, in the northern West Bank, taking them to an illegal colony.

The Prisoners’ Affairs Commission, Monday, released the details of three Palestinian youths who were assaulted by Israeli soldiers during their detention.

An affidavit from Ahmad Alqam, 17, from Beit Ummar town, testified that the soldiers beat him severely on his face and back, before arriving at the detention facility.

Interrogation involved being forced to sit for long hours in a low chair with his hands and feet hand-cuffed to the chair, remaining there for nine days before being transferred.

The commission recounted the testimony of Mustafa Bayari, detained during a military incursion into al-Jalazoun refugee camp, near Ramallah.

Bayari was severely assaulted by Israeli troops, having his head smashed against a wall many times.

He testified that interrogators assaulted him, humiliated him, and detained him for 38 days before sending him to the Ofer detention facility near Ramallah.

Bayari’s health has has declined since enduring torture in Israeli detention, the commission added, and is now suffering from acute head and ear pain, besides eyesight problems.

Lastly, the commission also related the case of Abdullah Sobh, 19, a resident of Jenin city, detained by Israeli soldiers at a military roadblock, near Tulkarem city, in the northern West Bank.