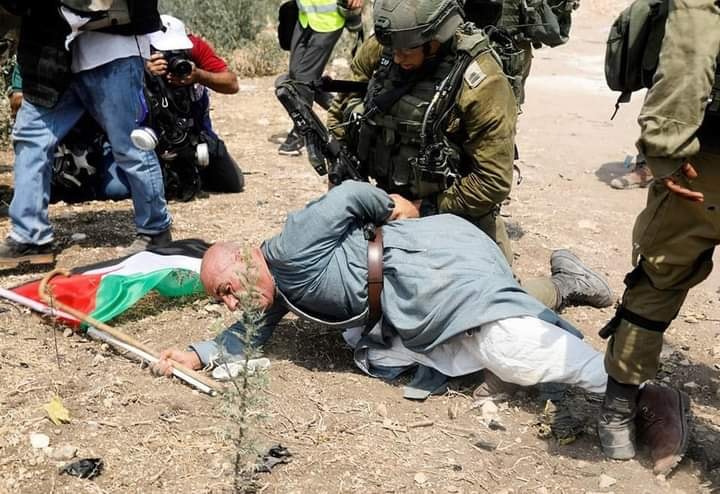 She stated that Israeli troops fired tear-gas at the demonstrators and physically assaulted an elderly man.

The demonstration was organized in order to express their collective rejection of the Israeli plans to build an illegal industrial settlement on Palestinian lands.

The Israeli soldiers attacked participants including journalists, whom were forbidden from filming, WAFA correspondent added.

The Governor of Tulkarem, Issam Abu Bakr, participated in the protest, stated that the people will continue holding demonstrations until the settlement project is stopped, adding that the project threatens to cut Tulkarem off from the nearby Qalqilia governorate,

Head of the Wall and Settlement Resistance Commission, Walid Assaf, one of the organizers of the protest activities would continue in order to defeat this project and others in the occupied Palestinian territories.

Shehab News
[The occupation forces brutally assaulting the elderly Khairy Hanoun and suppressing a protest protest rejecting the confiscation of lands from the village of Shofa near Tulkarm.]

Wall and Resistance Committee – Video: Journalist – Hazem Nasser
[Palestinian journalists play their humanitarian and moral role by saving the activist, Khairy Hanoun, from the clutches of the occupation soldiers, during his demonstrations against the establishment of a colonial industrial zone on the lands of the villages of Jabara, Shoufah, and Al-Kafriyat in Tulkarm today.]

Wall and Resistance Committee
[An anti-settlement activity against the establishment of a colonial industrial zone on Tulkarm lands.]