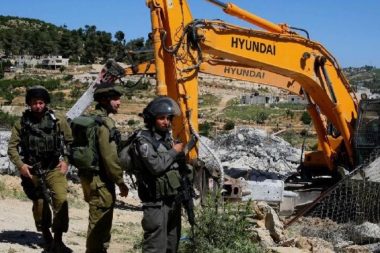 Media sources said the soldiers invaded the evacuated Mabo Dothan military base, near ‘Arraba, and continued bulldozing the lands surrounding it. The invasion and bulldozing is one of many carried out this month.

The sources added that the soldiers also installed a roadblock at the main entrance of the former military base, which was built on Palestinian lands.

It is worth mentioning that the army recently forcibly removed Bedouin shepherds from the area, in addition to removing two shops used for selling granite and ceramics.

In addition, the soldiers abducted two young men, in Jenin and Nablus, after the army invaded many homes and searched them, PPS said.

Furthermore, the soldiers abducted two Palestinians from the West Bank governorates of Hebron and Bethlehem, in the occupied West Bank, during invasions and violent searches of homes.