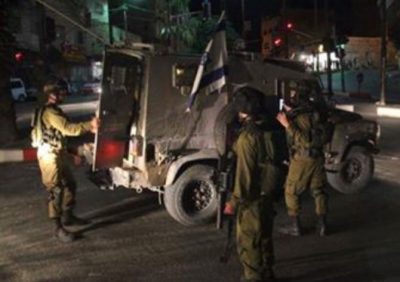 Israeli soldiers abducted, on Thursday at dawn, two Palestinians from the West Bank governorates of Hebron and Bethlehem, in the occupied West Bank, during invasions and violent searches of homes.

The Hebron office of the Palestinian Prisoners’ Society (PPS) said the soldiers invaded the ath-Thaheriyya town, south of the city, searched many homes and abducted Mohammad Suleiman Abu Sharkh, 30, before taking him to an unknown destination.

It added that the soldiers invaded many neighborhoods in Hebron city, and Ethna town, west of Hebron, before breaking into many homes and violently searching them.

In addition, the soldiers abducted two young men, in the northern West Bank governorates of Jenin and Nablus, after the army invaded many homes and searched them, PPS said.