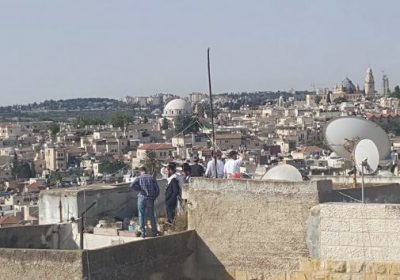 Israeli extremists of the Ateret Cohanim colonialist organization occupied, Monday, a Palestinian apartment building in the Muslim Quarter in the Old City of occupied East Jerusalem, allegedly after buying it.

Israeli daily Haaretz said that the six-apartment buildings have been apparently sold by their Palestinian owners, to the Israeli organization.

Resident ‘Ala al-Haddad, a Jerusalemite activist from the Old City, quoted the family stating that more than 40 Israeli settlers invaded the building, during early morning hours, and occupied it.

He added that the three-story building was one of many apartment buildings in the Sa’diyya neighborhood, and is surrounded by several Israeli colonialist outposts.

Haaretz said that Ateret Cohanim, an NGO that is active in encouraging Jews to live in Palestinian neighborhoods in occupied Jerusalem, has significantly stepped-up its activities in the Sa’diyya neighborhood, and the Muslim Quarter, in Jerusalem.

It quoted Palestinian residents stating that the Israelis entered the vacant building without any resistance, and had a key for it.

Israeli Channel 7 TV said that Chief Rabbi of Safad, Shmuel Eliahu, went into the building and held prayers with the Israelis who occupied it. He is known for his extreme anti-Arab, anti-Palestinian stances and statements.

Last week, a Palestinian family from the Muslim Quarter lost an appeal filed with the Jerusalem District Court, after they received an eviction order from the same organization. On May 9, a Palestinian house in East Jerusalem was also occupied by Ateret Cohanim.

The Muslim Quarter in Jerusalem is inhabited by more than 1000 Jewish settlers, including at least half who are Yeshiva students largely linked to Ateret Cohanim that now occupies twenty Palestinian buildings.

The group recently lost a case against a Palestinian family, and will have to vacate an apartment it illegally occupied, along with twenty other apartments, in September 2014.

Israeli Peace Now movement slammed the colonialist activities in occupied Jerusalem, and said such violations just cause further tension to the situation, and distance any chances for establishing peace in the region.

It denounced the colonialist Israeli activities in the occupied territories, and said that “settling in Palestinian neighborhoods in Jerusalem just leads to more obstacles to peace and the two-state solution.

There have been many incidents were Palestinian buildings in Jerusalem were occupied by the settlers through forged deeds, and in a few cases, after being sold by a family member without the approval or knowledge of his family.