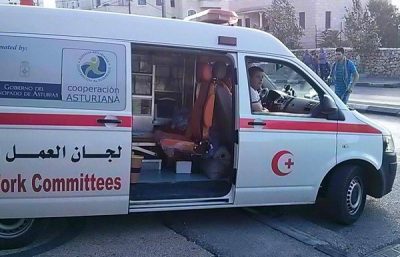 Israeli soldiers fired, Monday, several gas bombs at students and health workers of the “Health Work Committees,” in Hebron, in the southern part of the occupied West Bank, causing many to suffer the effects of tear gas inhalation.

The nursing students, and health workers, are with the Emergency Center of the Health Work Committees, in the southern part of Hebron.

They were trying to cross the Abu ar-Reesh Israeli military roadblock, when the soldiers started firing gas bombs at them, causing many to suffer severe effects of tear gas inhalation.

Some of the Israeli gas bombs were fired directly into the health center.

The Emergency Unit of the Health Work Committees has been subject to numerous Israeli violations and invasions, as the soldiers repeatedly fired gas bombs into the building and sprayed it with waste-water mixed with chemicals, in addition to repeated assaults targeting its workers and their freedom of movement.

The center provides medical services to more than 60.000 Palestinians in the area, and is also subject to attacks by fanatic Israeli colonists, and frequent army invasions.