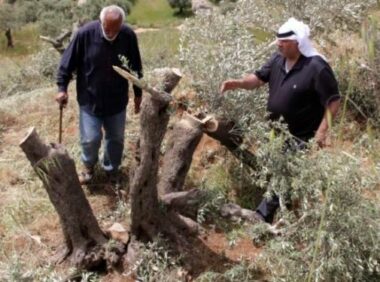 Local resident, Omar Samara, said the colonists uprooted at least 30 olive trees owned by the sons of the Yousef Hasan Souf and the family of the late Hussein Souf, in addition to Hasan Jabi Sour and ‘Aisha Qassem.

Samara added that, besides cutting the trees, the colonists demolished retaining walls, as part of their attempts to establish a motorcycle racing track, near their illegal colony.

The colonists also placed wood and installed a room on land, owned by the family of the late Aref Souf.

The area is subject to constant Israeli violations, including attacks carried out against the Palestinian farmers, especially since the colonists are trying to expand their illegal settlement by annexing more private Palestinian lands.

Roweida Souf, the widow of Aref Souf, said the attack on her land is not the first, as the colonists have previously cut and uprooted many olive trees, in addition to annexing 20 Dunams of her 60-Dunam orchard.

“We aren’t allowed to enter our own orchards without prior coordination,” she added, “If and when we are allowed to reach our lands, we are only given a few days to work and rehabilitate them.”