Israeli Colonist Injures A Palestinian Child In Her Eye 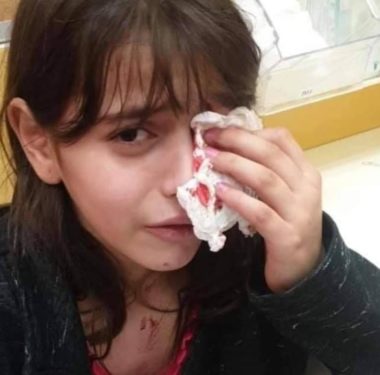 An illegal Israeli colonialist settler attacked, Sunday, a Palestinian child in the Old City of occupied Jerusalem, causing an injury in one of her eyes, in addition to cuts and bruises.

Media sources said the colonist assaulted the child, identified as Mariam Yasser Najeeb, 11, while playing and riding her scooter in the alleys of the al-Waad Street in the Old City.

Her uncle, Adel Najeeb, stated that Mariam was riding her scooter next to her family’s home, when a colonialist settler deliberately pushed her, causing her to fall onto the ground, before fleeing the scene.

He added that Mariam suffered a bad cut in her eyelid, which led to bleeding, in addition to bruises, before she was rushed to Shaare Zedek Medical Center in Jerusalem.

It is worth mentioning that there are many colonialist outposts in the al-Waad Street, which is considered a vital and ancient street as it is the main pathway leading to the Al-Aqsa Mosque.