Israeli Colonists Attack Father And His Son Near Hebron 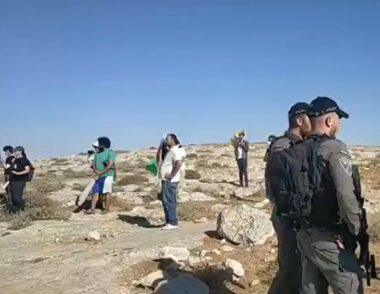 Rateb Jabour, the coordinator of the Protection and Steadfastness Committees in southern Hebron Hills, said a group of paramilitary colonists assaulted the Palestinians in Maghayer al-Abed area.

He added that the colonists attacked the Palestinians with batons, and hurled stones at them, wounding a man, 55 years of age, and his 23-year-old son, in the head and hand.

The wounded Palestinians were moved to a hospital in Hebron city where their injuries have been described as serious.

In related news, Israeli colonists cut, Friday, 84 fig and olive trees in addition to grapevines on Palestinian lands close to Shilu and Shvut Rachel illegal colonies, which were installed on stolen Palestinian lands in Qaryout village, south of the northern West Bank city of Nablus.