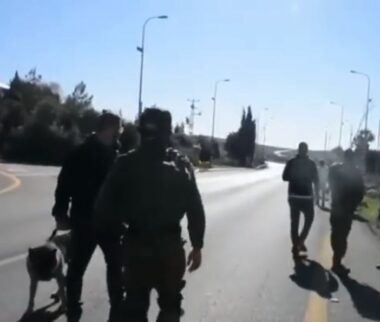 A group of fanatic illegal Israeli colonists attacked, on Saturday evening, Palestinian journalists who were documenting their seriously escalating violations, near Susiya illegal colony, south of Hebron city, in the southern part of the occupied West Bank.

The WAFA Palestinian News Agency said the colonists attacked two of its journalists, identified as Mashhour al-Wihwah and Hamza al-Hattab.

It added that the journalists, who wore clearly marked vests and helmets, were attacked while trying to reach the Tawamin village, east of Khirbet Susya Palestinian village.

The attack took place in front of Israeli soldiers who did not only fail to intervene but also ignored the journalists shouts and calls for help.

Many journalists said the soldiers just stood and watched while the colonists were assaulting them.

The soldiers also closed the area, and prevented the Palestinian journalists from entering it, while the colonists attempted to attack many Palestinians, and homes, including Barakat Morr, who was assaulted by the colonists two days ago, when they removed him and their family from a cave, they used as a residence to shelter themselves.

In related news, the colonists attacked many Palestinian and Israeli peace activists, in Masafer Yatta area, near Hebron, who were nonviolently marching in solidarity with Haroun Abu Arram, who was shot by the soldiers in the neck, earlier this month, and suffered quadriplegia.

Fuad al-‘Amour, the coordinator of the Protection and Steadfastness Committees, said the protest is the fourth in Masafer Yatta this month.

He added that the soldiers, and the colonists, have escalated their violations against the residents and the nonviolent protests in the area.

Many colonists also unleashed their dogs on the Palestinians during these violations.