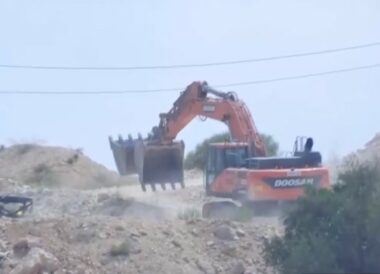 Rateb Jabour, the coordinator of the National and Popular Committees against the Annexation Wall and Colonies in Hebron, said the colonists bulldozed the lands to install an illegal outpost near a monument they installed in the area.

Fuad al-‘Amour, the coordinator of the Protection and Steadfastness Committees, said the colonists came from Havat Ma’on and Karmiel illegal colonies, which were installed on private Palestinian lands.

The lands in question are about 150 Dunams (37 Acres) and are privately owned by the local Palestinian families of Abu Zahra, Bheiss, and Ed’eis.