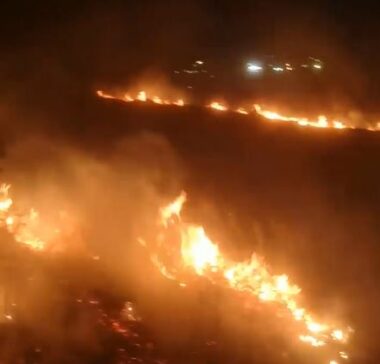 Daghlas added that the colonists torched large areas of Palestinian farmlands in the eastern area of the village before the locals and firefighters rushed to extinguish the fire.

Furthermore, the colonists attacked at least fifteen Palestinian homes, only 200 meters from their illegal outpost, in addition to causing damage to four cars.

Following the assaults, Israeli soldiers invaded the village and fired many gas bombs, concussion grenades, and rubber-coated steel bullets at the Palestinians.

Medical sources have confirmed that many Palestinians suffered the effects of tear gas inhalation, and a few others sustained cuts and bruises.

The soldiers also invaded and ransacked many homes, and occupied their rooftops to use them as firing posts and monitoring towers, in addition to attempting to abduct a child.

Daghlas warned of the seriously escalating violations by the illegal colonists targeting the Palestinians, their homes, and lands, not only in Nablus but also across the occupied West Bank, especially in Jerusalem.