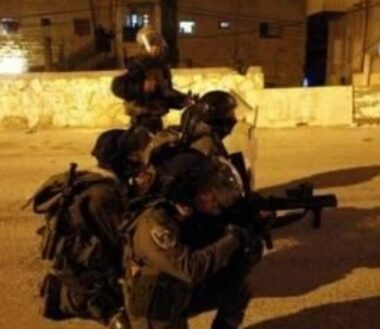 Local sources said the soldiers invaded the village after installing roadblocks around it, leading to protests.

Medical sources said the soldiers moderately injured one Palestinian with a live round in the abdomen, causing a moderate injury, in addition to shooting three others with live rounds in their legs, and one in his wrist.

The soldiers also fired a barrage of gas bombs and concussion grenades at the Palestinians, causing many injuries.

During the invasion, the soldiers stormed and ransacked many homes and shops, before confiscating surveillance recordings and equipment.

In related news, Israeli colonialist settlers burnt, on Sunday at night, large areas of Palestinian agricultural lands, in addition to attacking many homes and cars, in Jaloud village, south Nablus, before the soldiers invaded the village and injured several Palestinians.