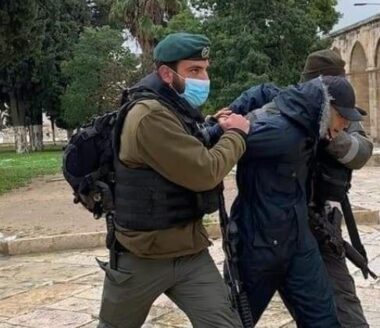 Israeli soldiers abducted, on Monday at dawn, eight Palestinians from Jerusalem, Bethlehem, and Hebron, in the occupied West Bank, after the army invaded many Palestinian communities, and searched homes.

They added that the soldiers also abducted Majdi Khaled al-Hadra from his home in the at-Tour town, after interrogating him and his family while ransacking the property.

Furthermore, the soldiers invaded Beit Ummar town, north of the southern West Bank city of Hebron, searched homes, and summoned Mohammad Rif’at Sleibi, 18, for interrogation in Beitar Illit illegal colony, and abducted him once he arrived there.

The soldiers also installed roadblocks at the main entrance of the ath-Thaheriyya and as-Sammoa’ towns, in addition to the Jouret Bahlas area at the northern entrance of Hebron city, before stopping and searching dozens of cars and interrogated many Palestinians while inspecting their ID cards.