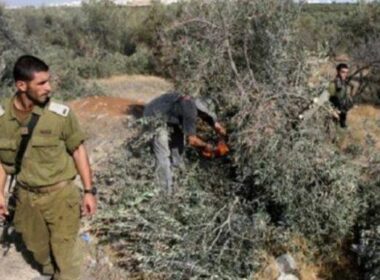 Daghlas added that the assailants cut and uprooted dozens of olive trees, around 60 years old, in Basin 18, in the southern area of the town.

He also said that the colonists cut more than 25 trees and installed a barn, on land owned by Nasreddin Allan, in the as-Soma’a area in Einabus.

In addition, the soldiers demolished a Palestinian home in Beit Hanina town, north of Jerusalem, allegedly for being built without a permit.

In related news, the soldiers demolished, Monday, an under-construction Palestinian home in Masafer Yatta village, south of Hebron, in the southern part of the occupied West Bank.