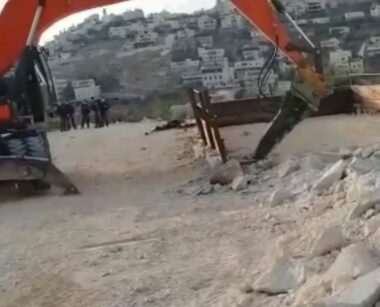 The soldiers also demolished a shed, in addition to a bran, in Jabal al-Mokabber.

The army claimed the structures were installed without a permit from the City Council, in occupied Jerusalem.

It is worth mentioning that the soldiers also invaded the al-Jeeb town, northwest of Jerusalem, and searched many cars, in addition to stopping many residents and cars near Beit Iksa town, and interrogated the Palestinians while inspecting their ID cards.

In addition, the soldiers demolished a Palestinian home in Beit Hanina town, north of Jerusalem, allegedly for being built without a permit.

In related news, the soldiers demolished, Monday, an under-construction Palestinian home in Masafer Yatta village, south of Hebron, in the southern part of the occupied West Bank.