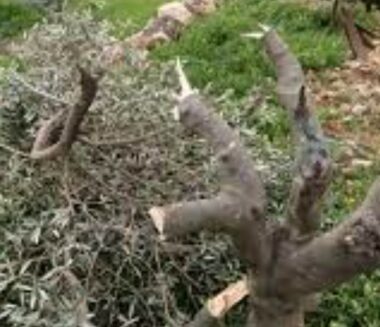 Israeli colonialist settlers uprooted, on Sunday at night, many Palestinian trees, in addition to stealing a water pump and electric wires, in Jaloud village, south of the northern West Bank city of Nablus.

Ghassan Daghlas, a Palestinian official who monitors Israel’s illegal colonialist activities in the northern part of the occupied West Bank, said the Israeli assailants came from the illegal Ahiya colony, which was built on stolen Palestinian lands.

Daghlas added that the colonists cut several olive trees and grapevines, in addition to stealing a water pump and electric wires around a barn, owned by Hashem Ahmad Hamoud.

It is worth mentioning that the area is subject to constant Israeli violations, especially attacks carried out by the colonialist settlers who frequently target the Palestinians, their homes, and their lands.