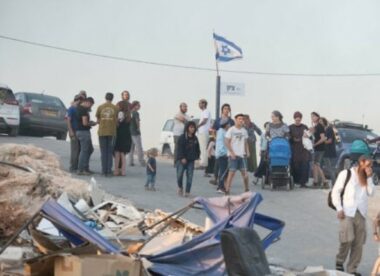 The Israeli army has decided to evacuate the illegal Evyatar illegal colonialist outpost which was installed by fanatic colonists on private Palestinian lands. The decision came after weeks of ongoing protests by the Palestinians.

The illegal outpost was installed on stolen Palestinian lands in Sbeih Mountain in Beita town, near the northern West Bank city of Nablus, several weeks ago, prompting the Palestinians to hold daily and nightly protests demanding its removal and the return of the lands to their Palestinian owners.

Israeli sources said the decision was made to remove the illegal outpost within days or just a few weeks, especially after military and security leaders in Tel Aviv warned of serious implications, including further deterioration in security conditions if the outpost is not removed.

Israeli daily Haaretz said the decision was made following deliberations that also included officials and politicians, who determined that keeping the outpost in place would lead to serious security escalation.

Israeli Defense Minister Benni Gantz will be holding consultations regarding the removal of the outpost and stated that the talks with the colonists are taking place to avoid any confrontation between them and the soldiers.

While all of Israel’s colonies in the West Bank, including Jerusalem, are illegal under International Law and the Fourth Geneva Convention, this outpost is one of the numerous outposts that were installed by the colonists without a permit from the Israeli occupation authorities.

The colonists in the illegal outpost are still calling for support from other colonizers to counter the attempt to remove it.

It is worth mentioning that the Palestinians have been holding ongoing protests day and night demanding the removal of the illegal outpost from their lands.

On Friday, June 11th, the soldiers killed a child, identified as Mohammad Sa’id Hamayel, 15, and injured more than 110 Palestinians, including 11 who were shot with live rounds, after the army attacked nonviolent protesters in Jabal Sbeih mountain.

On May 14th, the soldiers killed Dr. Issa Barham, 40, a District Attorney with the Palestinian Public Prosecution Department, in Sbeih Mountain. He was among ten Palestinians who were killed by the army and colonialist settlers that day.