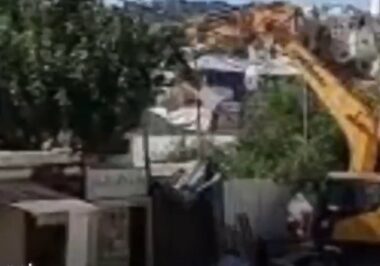 Israeli soldiers demolished Tuesday, a commercial structure, and injured at least sixteen Palestinians in the al-Bustan neighborhood in Silwan town, in the occupied Palestinian capital, Jerusalem. The building is among seventeen structures and homes threatened with demolition in Silwan.

The Wadi Hilweh Information Center in Silwan (Silwanic) said dozens of soldiers, police officers, and personnel of the City Council in occupied Jerusalem invaded the al-Bustan neighborhood during morning hours, and demolished “Hebron Meat Market” shop, after removing its contents.

Silwanic added that the soldiers assaulted many Palestinians and maced them with pepper spray, including the shop’s owner Nidal Rajabi who was repeatedly beaten up by the soldiers before they briefly detained him and his son, Harbi.

Rajabi told Silwanic that his store, 40 square/meter, was built ten years ago and that in the year 2016, the City Council in occupied Jerusalem issued a demolition order, in addition to a 20.000 Shekels fine which the family is still paying.

A scuffle broke out between the soldiers and the indigenous Palestinians before the army abducted Eyad Rajabi, Fadi Rajabi, and Ahmad Nidal Rajabi.

One Palestinian suffered bruises and burns in the arm after the soldiers fired a gas bomb at him.

Furthermore, the soldiers mildly injured a cameraman working for the Qatar-based Al-Jazeera after firing a gas bomb at him.

The soldiers also invaded and ransacked homes, in addition to interrogating many Palestinians.

Silwanic stated that the family that owns the shop was ordered to demolish its store, and today, Tuesday, was the deadline.

Silwanic said Israel issued demolition orders targeting seventeen residential and commercial buildings in the al-Bustan neighborhood, including 13 self-demolition orders where the families were informed to demolish their buildings or pay excessive fines and fees if the city carries the demolitions out.

It is worth mentioning that Israel is planning to demolish the entire neighborhood which includes 100 homes, and 1550 Palestinians, especially after the City Council rejected the neighborhood’s structural plan.

Israel has been planning to remove the Palestinians from the neighborhood by demolishing their homes and stores as part of colonialist plans that include creating a “National Garden,” on the ruins of Palestinian structures.