Israeli Colonists Injure A Father And His Son In Hebron 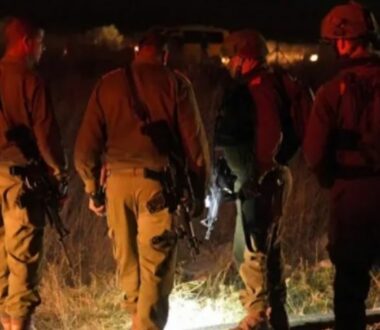 Illegal Israeli colonialist settlers injured, on Wednesday evening, a Palestinian man, and his son, after invading their home near Hebron, in the southern part of the occupied West Bank. Soldiers abducted Palestinians, including two who were shot by the army, in Hebron city.

Rateb Jabour, the coordinator of the protection and Steadfastness Committees in Masafer Yatta and Southern Hebron Hills, said the colonists hurled stones at Palestinian homes, before breaking into the home of Osama Hamamda, and assaulted him along with his son.

The father and his son suffered various cuts and bruises before Palestinian medics rushed to the scene and provided them with the needed treatment.

Palestinian activists in the area called on the residents to remain alert, especially in communities and neighborhoods that have illegal colonies and outposts.

In related news, the soldiers shot two Palestinians, and abducted them, near the Abu ar-Reesh military roadblock, in the southern area of Hebron.

In addition, the soldiers abducted two others at a military roadblock near the Ibrahimi mosque, after the army claimed that one of them “carried a key chain that contained a sharp object.”