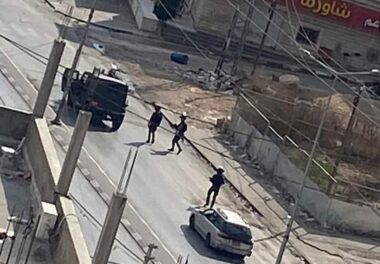 On Sunday, an illegal Israeli colonizer attacked two young Palestinian women with pepper spray in the center of Huwwara town, south of Nablus, in the northern part of the occupied West Bank.

Awwad Najm said his daughter Shaden and Rasha were walking in the center of the town on their way to their college before the colonizer attacked them with pepper spray.

He added that Palestinian medics rushed to the area and provided his daughter with the needed medical treatment.

Huwwara has lately been subject to seriously escalating attacks by the illegal colonizers who frequently invade the town and attack the Palestinians, their homes, stores, and lands.

The colonizers recently caused damage and burnt shops and cars, in addition to assaulting and injuring many Palestinians in front of Israeli soldiers in Huwwara.