Israeli Colonizers Assault A Palestinian Child In Jenin After Abducting Him 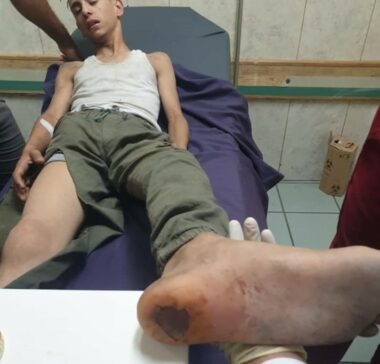 A group of extremist Israeli colonizers abducted, Tuesday, a Palestinian child near Sielet ath-Thaher town, south of the northern West Bank city of Jenin, before taking him to the site of a former colony where they tortured him and caused burns to his foot, the Palestinian News & Info Agency (WAFA) said.

The child, identified as Tareq Abdul-Razeq Zobeidi, suffered cuts and bruises to several parts of his body, in addition to burns to his foot before local medics moved him to a Palestinian hospital.

Mirweh Zobeidi, the child’s uncle, told WAFA that his nephew and his friends were walking to a picnic area before a car of Israeli colonizers tried to ram them.

He added that the colonizers then jumped out of their car and snatched Tareq before repeatedly beating him up, while his friends managed to escape.

The colonizers took the child to the area of the evacuated Homish illegal colony and started torturing the child after tearing his clothes, in addition to burning the soles of his feet with an eclectic lighter.

The Israeli assailants fled the scene after assaulting the child before Palestinian medics and residents rushed to the area.

The child received the urgently needed first aid before the medics moved him to Khalil Suleiman governmental hospital in Jenin city.