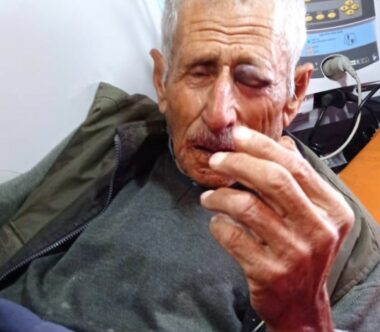 Illegal Israeli colonizers assaulted an elderly Palestinian man Saturday evening while grazing his sheep on his land in the al-Hafassi village near the illegal Einav Israeli colony, built on stolen Palestinian lands east of Tulkarem in the northern part of the occupied West Bank.

The colonizers assaulted Hussein Mohammad Fuqaha’, 80, causing various fractures and bruises to several parts of his body and an injury to his left eye.

The Palestinian was rushed to Thabet Thabet hospital in Tulkarem before being transferred to Rafidia hospital in Nablus.

The attack is not the first against the elderly man and his family, especially since the colonizers have been trying to force them out to annex it to their illegal colony.

Moayyad Sha’ban, the head of the Wall & Colonization Resistance Commission In Tulkarem, said after visiting with the wounded elderly man at the hospital that such attacks aim at terrorizing the Palestinians to force them out of their lands.

He added that the Palestinians will remain steadfast and will never surrender to these violations and called for national unity to counter these aggressions.

In related news, the colonizers assaulted a Palestinian farmer and his family on their lands in Kafr ed-Deek town, west of Salfit in the central West Bank.