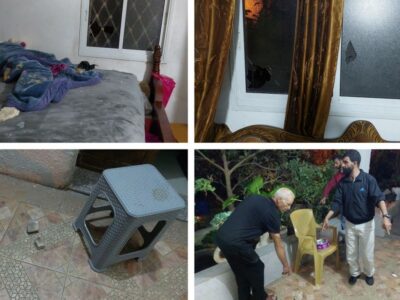 Local sources said the paramilitary colonizers invaded the town and hurled stones at four Palestinian homes, causing damage to windows and anxiety attacks among the children.

The sources added that the paramilitary colonizers came from the nearby illegal colonies of Givat Harel, Haroeh, Shilo, and Ma’ale Levona, built on stolen Palestinian lands in Sinjil and several surrounding villages and towns.

Furthermore, dozens of colonizers gathered at the intersection of Hares village, west of the central West Bank city of Salfit, and marched in the area carrying Israeli flags and chanting slogans calling for expelling the Palestinians from their homes and lands.

Also, many Israeli colonizers injured a Palestinian man after attacking his car near Huwwara town, south of Nablus, in the northern part of the occupied West Bank.