Israeli Soldiers Injure Many In Hebron 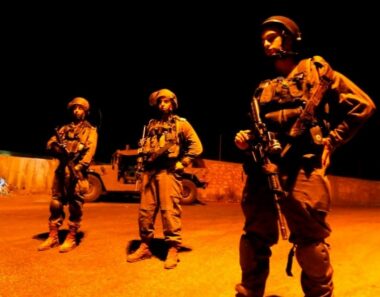 On Tuesday night, Israeli soldiers attacked and injured two Palestinians in villages near Hebron and caused many to suffer the effects of tear gas inhalation in Hebron city, in the southern part of the occupied West Bank.

Rateb Jabour, the coordinator of the National and Popular Committees against the Annexation Wall and Colonies, said the soldiers invaded Susiya village, south of Hebron, and repeatedly assaulted a Palestinian man, Bassam Nawaj’a, in his home.

The soldiers also invaded Khirbat Zannouta village, south of Hebron, and Ghwein village, east of the city, searched many homes and photographed them.

During the Zannouta invasion, the soldiers assaulted and injured Mohammad Ismael Daghamin, before Palestinian medics transferred him to a medical center.

In Hebron city, the soldiers invaded the Be’er Haram Ar-Rama area, leading to protests, before they fired many gas bombs and concussion grenades at the protesters and surrounding homes.

Medical sources said many Palestinians, including those in their homes, suffered the effects of tear gas inhalation.

In Bethlehem, the soldiers installed an iron gate at the main entrance of Beit Fajjar town, south of the city, and closed it before stopping and searching dozens of cars and barring the Palestinians from crossing.

The Israeli army frequently installs roadblocks at the entrance of the town in illegal acts of collective punishment against the Palestinians.