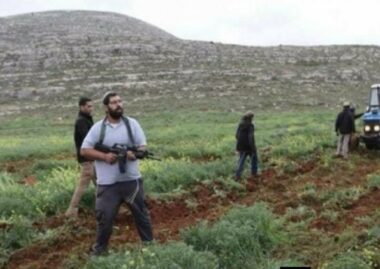 On Tuesday morning, illegal Israeli colonizers attacked many Palestinian farmers on their lands in Shoufa village, south of Tulkarem in the northern part of the occupied West Bank.

Taiseer Hamed, a local farmer, said the colonizers came from the illegal Avnie Hefetz colony, built on stolen Palestinian lands in the village, and attacked many farmers.

Hamed added that the Palestinians scuffled with the invading colonizers and refused to leave their lands before the Israeli assailants were forced to retreat while threatening to kill the farmers.

The Palestinians are subject to similar constant violations, including the uprooting of trees, destroying crops and property, and physical attacks.

The attacks mainly occur on lands close to illegal colonies and outposts built on stolen Palestinian lands and aim at trying to force the Palestinian out to build or expand the colonies.