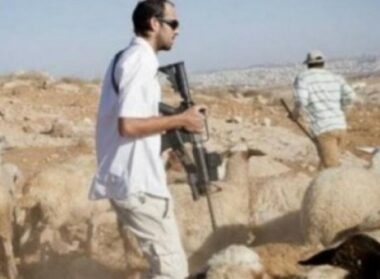 On Tuesday, illegal Israeli colonizers attacked Palestinian shepherds and demolished a residential room in the al-Jawaya village, east of Yatta town, south of Hebron, in the southern part of the occupied West Bank.

Rateb Jabour, the Protection and Steadfastness Committees coordinator in Masafer Yatta and Southern Hebron, said the colonizers came from an outpost they recently installed on stolen Palestinian lands in the village.

He added that the colonizers assaulted the Palestinian shepherds and threatened to kill their livestock if they do not leave the area.

Jabour stated that the colonizers constantly invade the area and release their livestock to graze on the Palestinian farmlands.

The colonizers recently released their livestock in ten Dunams of farmlands, owned by Mousa Shawahin, and destroyed his crops.

Also Tuesday, the colonizers demolished a residential room owned by Mahmoud Sawi, only a few days after he built it on his land in al-Jawaya village.

On Tuesday morning, illegal colonizers attacked many Palestinian farmers on their lands in Shoufa village, south of Tulkarem in the northern part of the occupied West Bank.