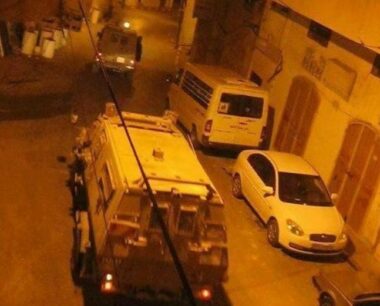 On Tuesday dawn, Israeli soldiers abducted at least eight Palestinians, including two children, from their homes in several parts of the occupied West Bank.

In Ramallah, in the central West Bank, the soldiers abducted Nassim Hosni Barghouthi, 26, from his home in Beit Rima town, northwest of Ramallah, and Ala’ Sarhan, 25, from Jifna town, north of the city.

In Tulkarem, in the northern West Bank, the army invaded Beit Lid town, east of the city, and abducted a young man, Mohammad Hafeth Draidi, from his home.

The Israeli army said its soldiers exchanged fire with Palestinian resistance fighters during the Nablus invasion.

In Hebron, in the southern part of the West Bank, the soldiers invaded and ransacked several homes before abducting two Palestinian children, Abdul-Rahman Mofeed Sharabati, 16, and Amjad Bassem Obeido, 16, from the al-Harayeq area.

The soldiers also installed roadblocks at the main entrances of Sa’ir and Halhoul towns, the al-Fawwar refugee camp, in addition to the Jouret Bahlas and al-Fahs areas in the northern and southern parts of Hebron city, before stopping and searching dozens of cars, and interrogated many Palestinians while inspecting their ID cards.