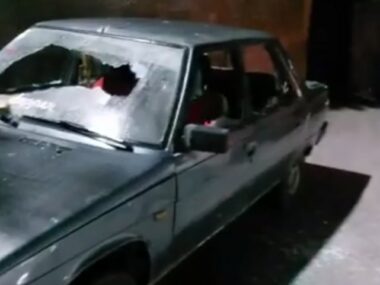 Illegal Israeli colonizers attacked, on Monday at dawn, many Palestinian homes, and at least one car, in Orif village, south of the northern West Bank city of Nablus, causing damage.

Ghassan Daghlas, a Palestinian official who monitors Israel’s illegal colonialist activities in the northern West Bank, said the colonizers came from the illegal Yitzhar nearby colony which was installed on stolen Palestinian lands.

He also said that the colonizers caused damage to at least one car that was parked in front of one of the homes in the village.

It is worth mentioning that, on Sunday, the colonizers caused damage to dozens of Palestinian cars, driving on the main Nablus-Ramallah Road, Jenin-Nablus Road, Qalqilia-Nablus roads, and various streets linking between the various villages and towns, south of Nablus.