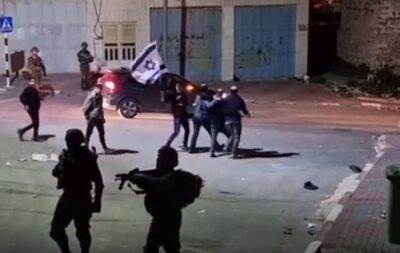 Ghassan Daghlas, a Palestinian official who monitors Israel’s illegal colonialist activities in the northern West Bank, said the colonizers came from the area of the evacuated Homesh colony.

Daghlas added that the soldiers attacked many homes, causing damage before the locals intercepted them, leading to protests.

Israeli soldiers invaded the village and started firing gas bombs and concussion grenades at the locals instead of removing the colonizers, causing many Palestinians to suffer the effects of tear gas inhalation. Also, illegal colonizers attacked Raja Barakat Obeyyat, 68, in Kisan village, east of Bethlehem in the occupied West Bank, wounding him in the head and several other parts of his body.

Soldiers Abduct Five Palestinians, Including A Child, In Jerusalem