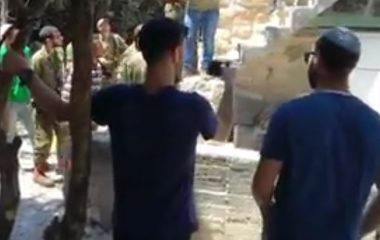 Dozens of Israeli colonizers, illegally living on stolen Palestinian lands in the southern West Bank city of Hebron, attacked Friday several Palestinians and their homes in Tal Romedia area, in the center of the city.

Morad Amro, the coordinator of the Youth Coalition against Settlements, said the colonists attacked activists of the coalition, and several Palestinians, during an activity by volunteers aiming at conducting maintenance work in Tal Romedia.

He added that the assailants also attacked many homes, including the home of photojournalist Emad Abu Shamsiyya, and the family home of Hashem al-Azza, 54, who was killed in 2015, after suffering the severe effects of teargas inhalation, when dozens of soldiers invaded the Zawiya area in the city.

The colonizers also attacked Yousef al-Azza and his family while the activists were conducting repair work to preserve the family home, and the area around it.

Amro said that these constant violations and assaults aim at trying to force the Palestinians out of their homes and lands, so that Israel can illegally confiscate their property for the benefit of its colonial settlements and military occupation.