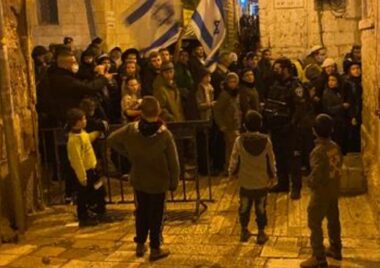 A large group of fanatic illegal Israeli colonizers conducted, on Sunday evening, a provocative march in front of Palestinian homes, in the Old City of the occupied Palestinian capital Jerusalem, in the West Bank.

Media sources said the colonizers marched accompanied by many soldiers who imposed restrictions on the movements of the indigenous Palestinians in the city.

They added that the colonizers invade the al-Qattanin historic market area in the Old City and started dancing in the streets while chanting racist slogans. During the match, Israeli helicopters hovered over the entire area.

Many Palestinians protested the march, and launched fireworks towards the marchers, while Israeli soldiers fired gas bombs and rubber-coated steel bullets at the Palestinians.

In related news, the Wadi Hilweh Information Center In Silwan (Silwanic) has reported that the soldiers also abducted a Palestinian child, identified as Nasim Damiri, from the Ein al-Louza neighborhood in Silwan town, in Jerusalem.