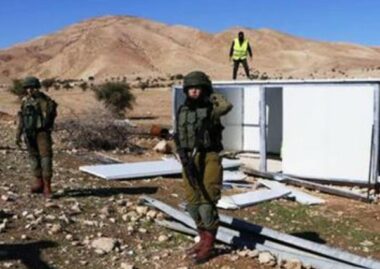 A group of fanatic illegal Israeli colonizers installed, on Sunday evening, an outpost on stolen Palestinian lands near Jericho city in the northeastern part of the occupied West Bank.

Fares Ka’abna, a local media activist in Jericho and the Jordan Valley, said the colonizers of the illegal “hilltop youth movement,” installed several tents on the Palestinian lands.

He added that the area is known for its fertile nature and grazing fields the Palestinian shepherds and farmers use.

Ka’abna stated that the colonizers have been trying to take over large areas of grazing lands and fertile fields and that they brought several water tanks, tents, sheep, and various sorts of supplies to install the outpost.

It is worth mentioning that several outposts have recently been installed on Palestinian lands by the “hilltop youth” colonialist group, especially near the villages of Taybeh, Deir Jarir, and Kafr Malek, east of the Ramallah governorate, in the central West Bank.

Also, the Jordan Valley is subject to constant Israeli violations, including the theft of fertile Palestinian lands, the demolition of homes and various Bedouin communities, in addition to many areas that are used as live-fire training grounds for the Israeli army, which also includes displacing many families and the devastation of Palestinian agricultural lands, and have led to many casualties, including fatalities.

Teen Killed By An Explosive Dropped By The Army Near Tubas