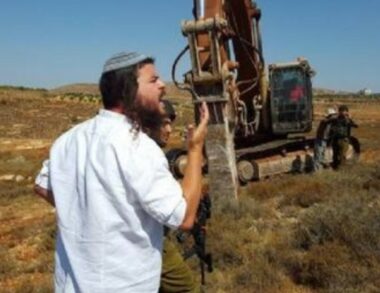 Illegal Israeli colonizers continued Sunday, the bulldozing of Palestinian lands and the preparations for a new illegal colony in Khirbat al-Farisiyya village, in the West Bank’s Northern Plains.

Local human rights activist Aref Daraghma said the colonizers started the bulldozing and the preparations on the stolen Palestinian lands nearly a month ago, near the tents of the local shepherds.

Daraghma said the colonizers are trying to remove the Palestinians to build colonialist, segregated infrastructure, including a school and public facilities.

He added that the colonizers bulldozed and uprooted about 30 Dunams of Palestinian lands and installed tents and a large water tank hauled by heavy machinery.

It is worth mentioning that the Israeli army initially declared the lands a “closed military zone,” preventing the Palestinians from entering it, but at the same time allowing the colonizers to enter them to establish an outpost.

The Palestinians fear that the Israeli army is planning to annex 28.000 Dunams of Palestinian farming and grazing areas, which are essential for the shepherds and farmers.