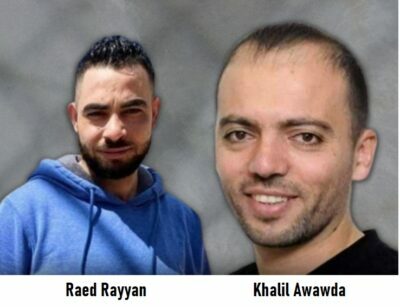 The Palestinian Detainees’ Committee has reported that two political prisoners held by Israel are continuing the hunger strikes for the 81st and 46th days, protesting their continued Administrative Detention without charges or trial.

The Committee stated that Khalil Awawda, 40, from Ethna town, northwest of the southern West Bank city of Hebron, began his strike 81 days ago and is suffering various serious complications.

It said the detainee is now dependent on a wheelchair and suffers a sharp pain in the joints and migraine, dizziness, blurred vision, and other complications.

The Committee also said that the Prison Authority frequently transfers him to Israeli hospitals to undergo medical checkups; however, he is constantly sent back to the prison clinic without being examined.

“The constant transfers are another way to punish the detainees and prevent them from resting,” the Committee said, “The prison authority is trying to cause more pressure and exhaustion to force the detainees to end the hunger strike without achieving their legitimate demands.”

Also, detainee Rayed Rayyan, 27, from Beit Doqqo village, north of occupied Jerusalem, continues the hunger strike for the 46th day, despite his deterioration of health.