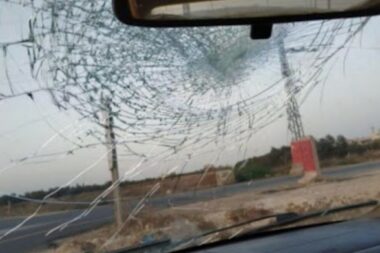 A group of illegal Israeli colonizers hurled stones, Sunday, at many Palestinian cars near Nablus, in the northern part of the occupied West Bank.

Local sources said the colonizers attacked many Palestinian cars on the Nablus-Ramallah Road, causing damage to several vehicles, without leading to injuries.

Ghassan Daghlas, a Palestinian official who monitors Israel’s illegal colonialist activities in northern West Bank, said the Israeli assailants came from the illegal Yitzhar nearby colony which was built on stolen Palestinian lands.

He stated that dozens of colonizers gathered at the intersection before attacking the Palestinian cars and added that Israeli soldiers were in the area but failed to intervene and stop them.

It is worth mentioning that similar attacks were reported in other parts of the occupied West Bank, especially near Hebron, in the southern part of the occupied territory.