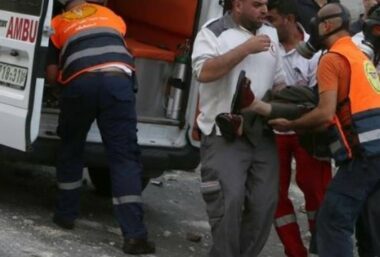 Israeli soldiers injured, earlier Sunday, a Palestinian journalist with a rubber-coated steel bullet and caused many Palestinians to suffer the effects of tear gas inhalation, in addition to abducting a young man, after several army jeeps invaded the central West Bank city of Ramallah and nearby al-Biereh.

Medical sources said the soldiers shot a journalist, identified as Maher Haroun, with a rubber-coated steel bullet, and caused dozens of residents to suffer the effects of tear gas inhalation.

Furthermore, the soldiers invaded the al-Biereh city, before storming and ransacking the home of Mohammad Salamin, 28, before abducting him.

The soldiers also invaded Birzeit city and drove around its various neighborhoods before withdrawing.