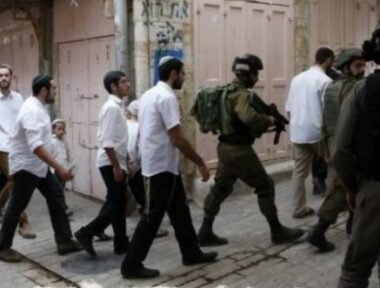 On Monday evening, illegal paramilitary Israeli colonizers attacked and injured several Palestinians in the Tal Romeida neighborhood and Shuhada Street, in the center of Hebron city, in the southern part of the occupied West Bank.

Media sources said the colonizers attacked many Palestinians and hurled stones and empty bottles at them, in addition to attacking a few with pepper spray.

They added that the attack led to eight injuries; six received treatment from Palestinian medics, and two were moved to the Hebron Governmental Hospital.

Tal Romeida and the Shuhada Street area are subject to ongoing Israeli violations by the colonizers and the soldiers, including the invasions of homes and the assaulting of children, amidst constant attempts to remove the Palestinians from the area.