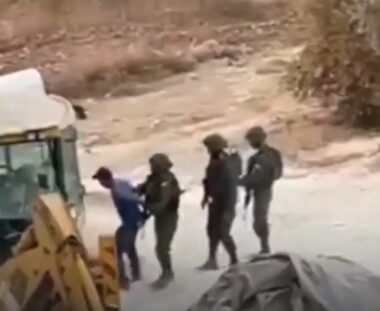 On Monday evening, Israeli soldiers invaded Deir Nitham village, northwest of the central West Bank city of Ramallah, abducted four Palestinians, and assaulted one of them.

Palestine TV said the soldiers invaded the village and abducted Monjid Mohammad Tamimi while trying to confiscate his bulldozer.

Many Palestinians protested the invasion and the attacks before the soldiers fired a few live rounds, gas bombs, and concussion grenades.

In related news, the soldiers fired live rounds at a Palestinian car near the main entrance of Nabi Saleh village, northwest of Ramallah. The attack did not lead to injuries, and no arrests were reported.