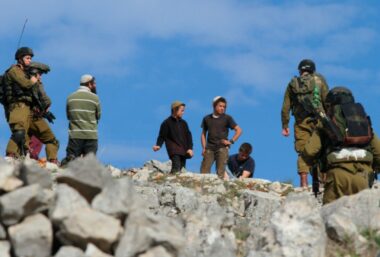 On Friday, a group of illegal Israeli colonizers, accompanied by many soldiers, invaded archeological sites on Palestinian lands in Beit Ummar town, north of the northern West Bank city of Hebron.

Local activist Mohammad Awad said the soldiers accompanied dozens of colonizers into the sites, and conducted tours while carrying maps of the Palestinian lands and the sites.

Awad added that the colonizers and the soldiers also invaded archeological areas south of Beit Ummar.

He said the sites are close to the illegal Karmie Tzur colony, which was built on stolen Palestinian lands in Beit Ummar, and extends to the Gush Etzion colonialist block.

Awad stated that the residents fear that Israel intends to illegally annex more of their lands to occupy all the sites and to expand its colonies in the area.