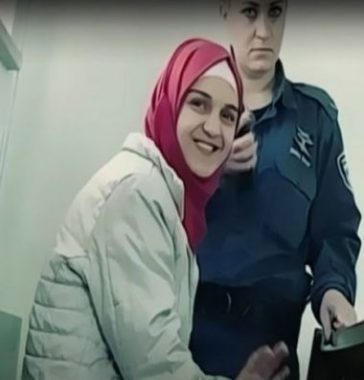 The Israeli District Court in occupied Jerusalem sentenced, Wednesday, a Palestinian teenage girl to ten years in prison, after convicting her of “an attempted stabbing attack,” in the city. The verdict came after Israel delayed her court hearings 24 times since he abducted in February 2016.

The court session was held after repeated delays and rescheduling by the Israeli Prosecutor’s Office, then following Wednesday’s hearing, the teen, identified as Malak Salman, 17, was sentenced to ten year in prison.

Her lawyer and family rejected an Israeli plea agreement sentencing her to fifteen years in prison in exchange for “confession of carrying out a stabbing attack against the soldiers.”

Malak was taken prisoner, on February 9th 2016, in Bab al-‘Amoud area, one of the famous gates of the Old City of occupied Jerusalem.

Amjad Abu Assab, the head of the “Jerusalem Detainees’ Parents Committee,” denounced the verdict and considered it another Israeli assault on children in occupied Palestine, especially in Jerusalem.

He added that this verdict showed the “real racist nature of the Israeli legal system” amidst ongoing deadly international silence, especially in Malak’s case, who never attempted any attack.”

Abu Assab criticized various international legal and human rights groups for what he called “complicity with the Israeli crimes,” especially since Israel’s ongoing aggression and occupation are serious violations on International Law, the Fourth Geneva Convention and all related treaties.

He also stated that detained women are held in prisons far away from their families, and are living under very difficult conditions, ongoing violations, and denied basic rights.

It is worth mentioning that Malak was violently beaten up by the soldiers when they abducted her in Bab al-Amoud, causing various cuts and bruises.

Since her abduction and imprisonment, Malak’s courts sessions have been delayed by Israel for more than 24 times, and she was continuously being transferred to various prisons; she is currently held at the HaSharon prison.