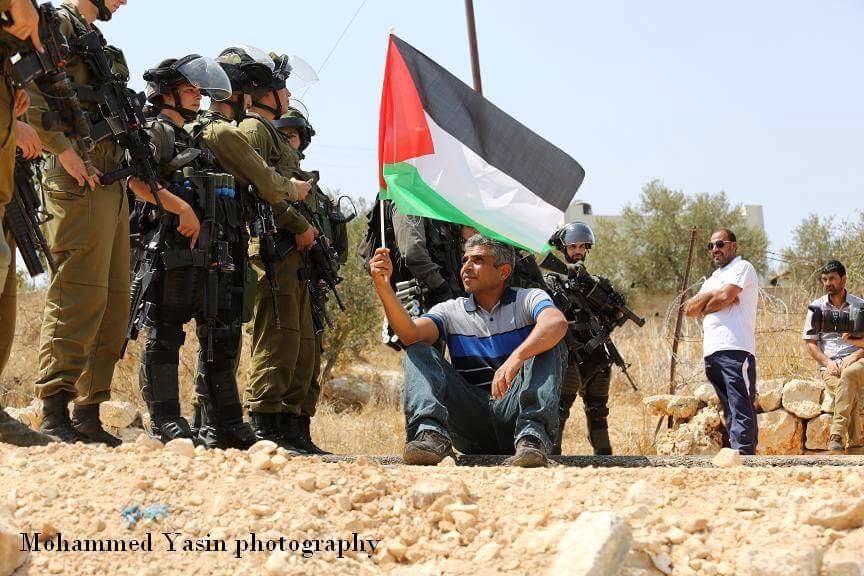 On Friday afternoon, dozens of local residents from the village of Bil’in, along with Israeli and international activists, marched toward the site of the Israeli Annexation Wall constructed on village land. They were pushed back by Israeli forces who attacked the protesters with rubber-coated steel bullets, tear gas and concussion grenades.

According to the Popular Resistance Committee of Bil’in, this week’s protest focused on the recent desecration and attacks on holy sites by Israeli settlers and soldiers. These attacks have included armed marches by settlers and soldiers into the Al-Aqsa mosque, as well as the defacement of numerous Christian churches by Israeli assailants.
Palestinian residents of Bil’in have been protesting every Friday for the past eleven years, and the weekly protests recently entered the 12th year.

At this week’s protest, the marchers headed directly toward a line of heavily-armed Israeli soldiers and stood and sat in front of the soldiers carrying Palestinian flags. The soldiers then began to shoot tear gs and concussion grenades toward the crowd.

As the protest dispersed, the soldiers also fired rubber-coated steel bullets, according to local sources.